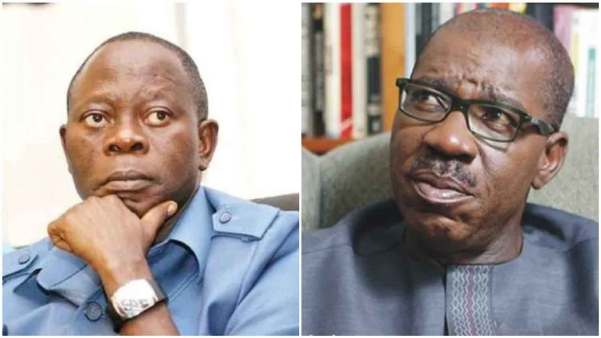 Reports have it that the Edo state chapter of the All Progressive Congress (APC) has suspended their National chairman Adams Oshiomole. In recent times, the Edo state governor Godwin Obaseki and Adams Oshiomole have not been in good terms as a tussle of power has being going on in the state.

It seems Obaseki has not been loyal to Adams Oshiomole which might have caused the disagreement between both parties and rumors have it that after the first term of Obaseki, Oshiomole would want another person to take over as the preferred candidate for the APC during the gubernatorial elections, denying the incumbent governor a chance for a second term.

The suspension scuffle started after the state chairman of the party Anselm Ojezua was suspended, a man who seems to support the incumbent governor of the state.

After his suspension, it was reported that Obaseki and some party statesmen had an emergency meeting were they arrived at a vote of non confidence to suspend the party state secretary Lawrence Okah and their National chairman Adams Oshiomole although the Special Adviser to the Governor on Media Strategy, Crusoe Osagie, said it was Lawrence Okah that was sacked from office. The big question is can a state party suspend it’s National chairman?

BREAKING NEWS: SOWORE AND DASUKI TO BE SET FREE BY THE FEDERAL GOVERNMENT

WHAT YOU NEED TO KNOW ABOUT NIGERIAN ANIMATOR CREATOR ROYE OKUPE

IS PAMILERIN LYING ABOUT ENGAGING HIS FIANCEE?